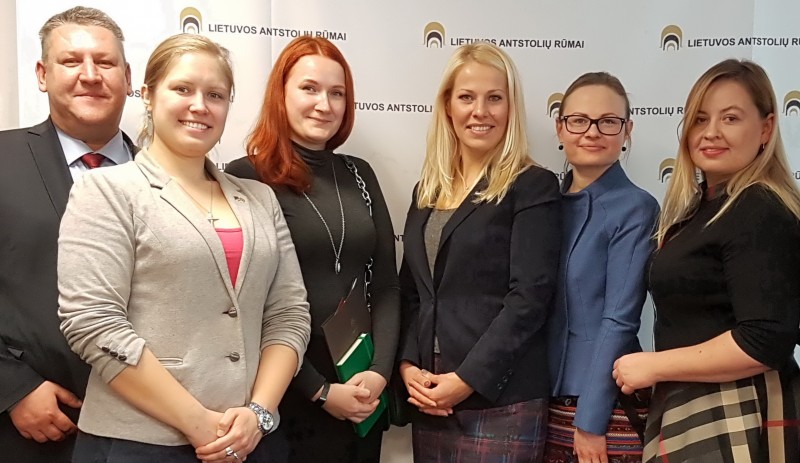 The representatives of the Ministry of Justice of the Republic of Latvia and the Chamber of Judicial Officers of Latvia are interested in a new service of judicial officers which is serving of foreign documents.

Lithuanian judicial officers were the first in the Baltic States who took over from the regional courts the function of serving of foreign court and out-of-court documents. Since 1 January this year in our country it is the exceptional function of judicial officers, as well as in the majority of Western European countries.

During the meeting that took place at the Chamber of Judicial Officers of Lithuania on 15 November the representatives of Latvia were presented with the journey of the new service from the initial idea to today’s practical results.

Since the beginning of 2016 Lithuanian judicial officers received requests to serve various documents from 9 countries. The majority of requests were received from Germany and Norway.

The guests were interested in what laws and regulations in Lithuania regulate the serving of documents following Regulation (EC) No 1393/2007 of the European Parliament and of the Council of 13 November 2007 on the service in the Member States of judicial and extrajudicial documents in civil or commercial matters (service of documents) and the Hague Convention of 15 November 1965, how the accounting of received and served documents is carried out and in other matters.

“You have completed enormous work in regulating the procedures of serving of foreign documents and in forming the modern practice. We are happy to hear the answers to all matters that are important to us”, said the Director of the Department of Legal Cooperation of the Ministry of Justice of Latvia Baiba Jugane-Lintere.

Dovilė Satkauskienė claims that the serving of all documents lasted no longer than a month. More effective serving is witnessed not only by actual results, but also by the content of the procedure. As a contrast to the previous procedure when documents used to be sent by mail, the legal consequences which might be or are the result of serving of the document or the refusal to accept the document are explained to the receiver. If necessary, the judicial officer also looks for the addressee by gathering additional information: he or she checks the data in public registers, social networks, contacts the receiver’s neighbours.