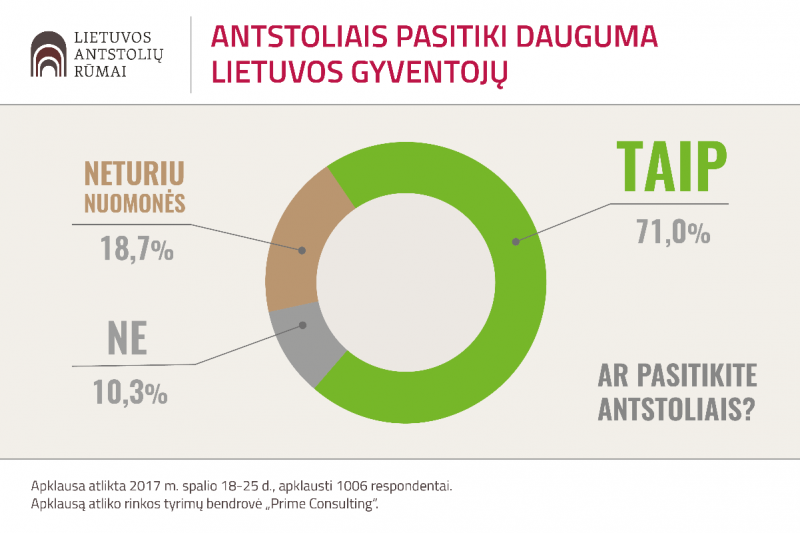 "The judicial officers‘ system is working stably. There are a number of up-to-date tools that help initiate and track debt recovery processes without leaving home. People appreciate it, "says Inga Karalienė, Chair of Presidium of the Chamber of Judicial Officers of Lithuania, judicial officer.

Judicial officers are currently repaying about 40-60% of small debts up to 1000 euros. Each judicial officer's day helps individuals and the state to recover at an average of 405 thousands euros debts.

At the program „Open Talk“ broadcasted on 21st November on the "Knowledge Radio" it was emphasized that one of the reasons for trust in judicial officers is the growing awareness among the population of the differences between strictly regulated and controlled judicial officers' activities and private debt recovery companies, which activity in practice is not regulated in Lithuania.

As emphasized by the Head of the Department of Private Law of Faculty of Law of Vilnius University, prof. Habil dr. Vytautas Nekrošius, people already understand that, in order to be sure, they have to go to the judicial officer, and not to someone, just promissing to recover everything.

The judicial officers' activities are strictly based on the law, so here are the guarantees of legality, supervision and liability.

On October 18-25 of 2017 1006 Lithuanian residents were interviewed. The research ordered by the Chumber of Judicial Officers of Lithuania was carried out by the market research company Prime Consulting. An analogous survey was conducted on September 30 - October 12 of 2016.