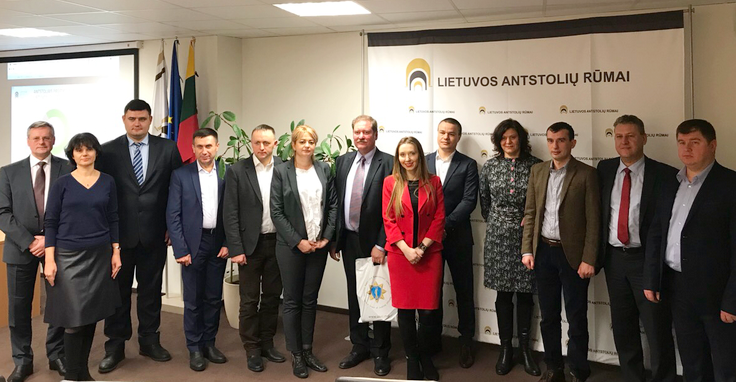 From 29 to 31 January, the delegation of Moldova’s Chamber of Judicial Officers, Ministry of Justice and representatives of Anticorruption prosecutor’s office visited Lithuania.

The aim of Moldavian lawyer’s practical/cognitive visit was to directly introduce themselves with the activity of Chamber of Judicial Officers of Lithuania and innovations in the field of enforced implementation of decisions.

“We are bringing with us a lot of ideas on how to improve not only the activity of judicial officers of Moldova, but also our entire judicial system”, summarised the impression of the visit the Secretary General of the Chamber of Judicial Officers of Moldova Oxana Novicov.

As one of the examples to follow, lawyers of Moldova consider smooth procedures of seizure of property, which in Lithuania are ensured by unified electronic Register of Acts of Seizure of Property.

Active, strong and independent self-governance of judicial officers is an incontestable value.

As noted by the member of the Presidium of the Chamber of Judicial Officers of Lithuania Inga Karalienė, active, strong and independent self-governance of judicial officers is an incontestable value. She remembered that in 2003, when private judicial officers of Lithuania began their activity, around 50 per cent of performed procedural actions were approved by the court. Today, the court solves only those matters concerning which a dispute arises. Now, judicial officers independently approve acts of sale of property at auctions, analyse claims of persons concerning procedural actions, solve matters of changing of party to the implementation process.

Private judicial officers have been carrying out their activities in Moldova since the beginning of October of 2010. Moldova has rearranged the public system of offices of court judicial officers into the private one by using the experience of Lithuania and other states. Regardless of positive changes that occurred after the reform of the judicial system, there are still many uncertainties and problematic issues in the practical activity of judicial officers of Moldova, which are intended to be solved by using the advanced practice of foreign partners.