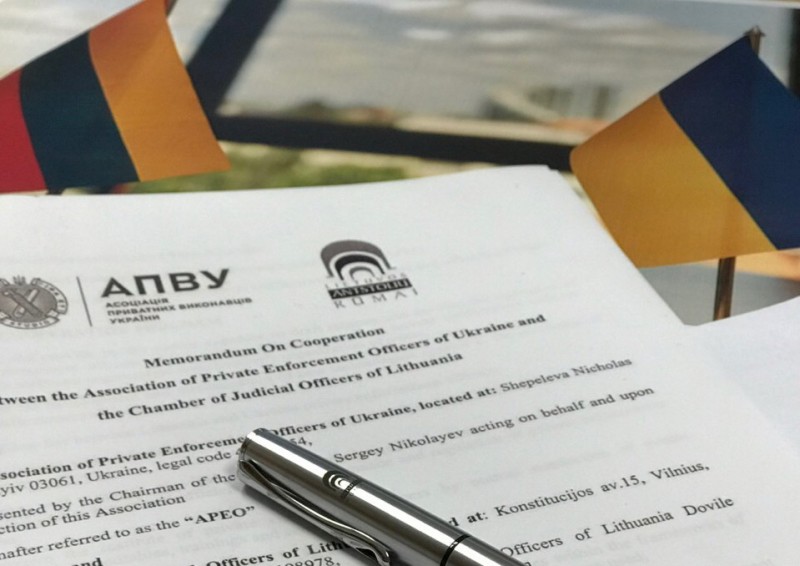 In March 2018 a Memorandum of Cooperation between the Association of Private Enforcement Agents of Ukraine and the Chamber of Judicial Officers of Lithuania was signed.

It was agreed to exchange experience and expert knowledge in developing the private judicial officers’ institute, to share information on innovations in legal regulation and organizational measures that would increase the efficiency of judicial officers’ activities, as well as to organize conferences, seminars, internships.

Ukraine has been actively taking actions for some time in implementing reforms of the legal system, including reform of the enforcement system. In Ukraine private judicial officers began their activities less than two years ago. Ukrainian judicial officers are especially in the need of experience and knowledge of Lithuanian enforcement professionals acting privately for 15 years.

Ukrainian judicial officers acknowledge that in their country are relevant the same problems, with which judicial officers face in many other countries: public tolerance for offenders and non-executives of court’s judgements, and limited ability to recover debts in this category, also issues of the introduction of information technology in the enforcement process.

The Chamber of Judicial Officers of Lithuania hope that methodological assistance and professional advice will accelerate the consolidation of private judicial officers in the Ukrainian legal system and the established professional cooperation will be beneficial for both parties.