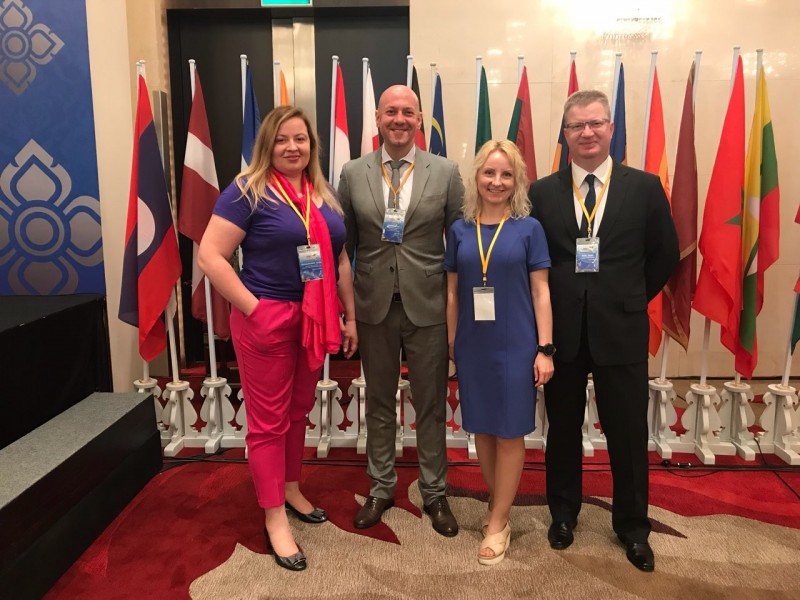 From left to right: D. Satkauskienė, the Director of the Chamber of Judicial Officers of Lithuania, A. Spore, the Chairman of the Latvian Sworn Bailiffs' Council, G. Berlande the Director of the Latvian Sworn Bailiffs' Council, J. Pool, the Chairman of the Assembly of Judicial Officers of Estonia.

On 1-4 May, in Bangkok, the capital city of Thailand, the 23rd Congress of the International Union of Judicial Officers (UIHJ) took place. At the Congress, a new management and Secretariat-General have been formed. Belgian Judicial Officer Marc Schmitz has been elected president of UIHJ for a three-year term. According to D. Satkauskienė, determination and innovation of the Baltic States‘ Judicial Officers‘ organisations help gain the confidence of foreign colleagues.

For example, the use of cryptocurrencies for debt recovery is one of the greatest challenges that bailiffs face worldwide, and Lithuania has already taken the first step into this area: the information system for monetary restrictions operating from 2015 onwards provides an opportunity to seize electronic money.

The Congress held every three years is the highest governing body of the UIHJ. This year‘s forum was attended by 400 representatives from over 60 countries.

After the 23rd Congress, the number of Judicial Officers‘ organisations united with the UIHJ increased to 96: Thailand, Mongolia, Ukraine, Uzbekistan, and Kazakhstan joined the existing members.