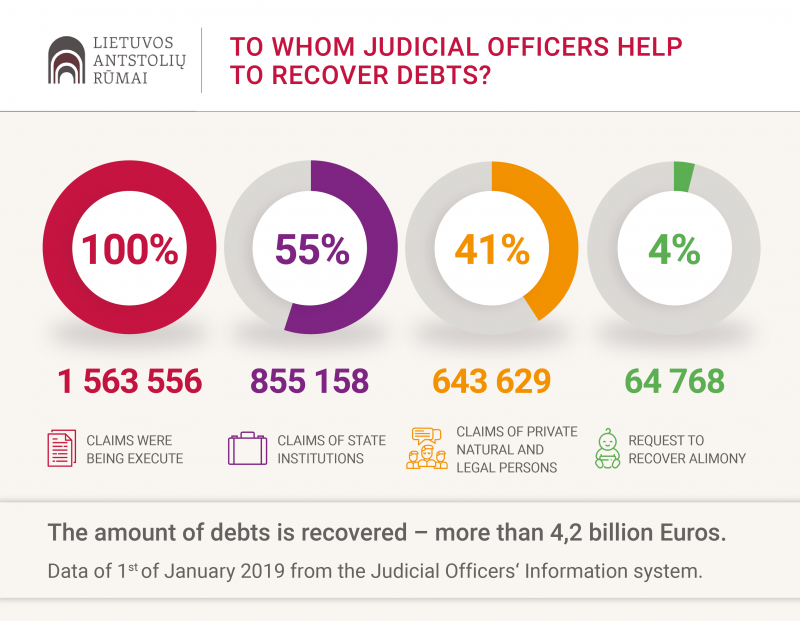 The obvious decrease in the need to use compulsory measures to recover the smallest debts is a very good sign. There are more and more honest people who fulfil basic obligations independently, – says Chairwomen of the Presidium of the Chamber of Judicial Officers of Lithuania, Judicial Officer Inga Karalienė.

Debt decrease trends are also obvious in the child support recovery field. In 2018, judicial officers received 3.2 thousand new requests for the recovery of child support, which is 19 percent less than in 2017.

However, the number of claims from foreign creditors is noticeably increasing. Debts adjudged by foreign courts and other institutions comprised almost 6 percent of all the claimed debts in 2018, even though such debts comprised only 0.7 percent of all debts claimed in Lithuania in 2016.

Compared to the data collected in 2017, the statistical average amount recovered by judicial officers by completing one process increased by almost 63 percent in 2018: from 162 EUR to 259 EUR. This means that the compulsory recovery system is used more purposefully. Complex legal procedures are being increasingly initiated only when debts are sufficiently high and when settlement issues cannot be solved by mutual agreement.

According to the data of the judicial officer information system, judicial officers helped creditors recover a total of 67.7 million euros of debts over the past year. This is 55 percent or 23.9 million EUR more than the amount that was recovered in 2017. The improved results confirm that the compulsory debt recovery system that has been used in Lithuania for sixteen years effectively protects the interests of creditors. Judicial officers also have sufficient competence to recover larger debts which require the application of a larger number of complex legal measures.