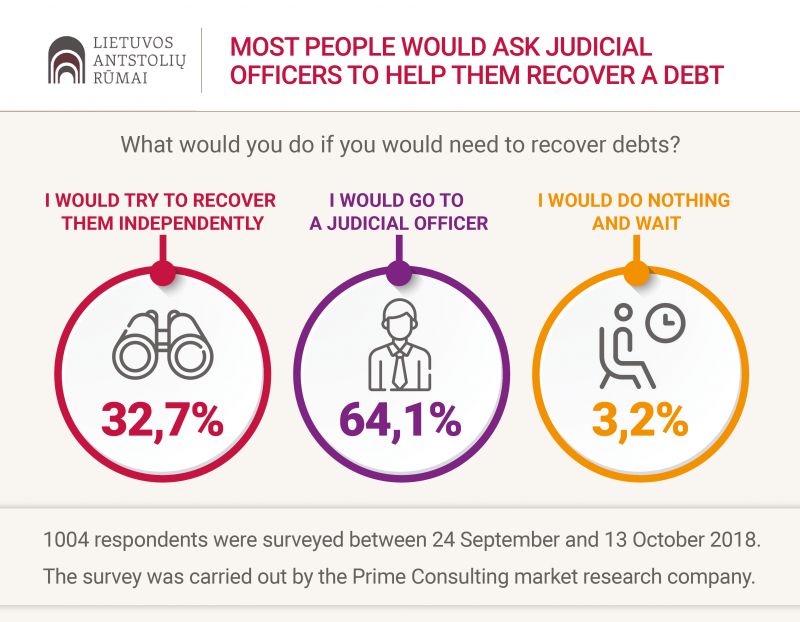 In 2018, the willingness of people to use the services of a judicial officer to recover their debts was the highest in the last three years. This is supported by the data collected during the 2016-2018 public opinion surveys.

64 percent of participants of the new survey said that they would use the services of a judicial officer to recover their debts (58 percent in 2016, 63 percent in 2017). The number of people who would try to recover their debts independently (from 36 to 32 percent) or do nothing at all (from 6 to 3 percent) has decreased accordingly within two years.

Despite the unfavourable public image of the judicial officer profession, people associate judicial officer services with real possibilities to recover debts and fulfilment of other legal requirements. Such an outlook is beneficial for both sides: judicial officers establish themselves as professionals who help ensure the fulfilment of obligations, while creditors shorten the debt recovery process to the maximum, – says Chairperson of the Presidium of the Chamber of Judicial Officers of Lithuania, Judicial Officer Inga Karalienė.

Also, in 2017, judicial officers added 8.4 million euros of income and value added taxes to the state budget. You can build two kindergartens with this amount.

A representative survey was carried out by the Prime Consulting market research company. 1004 respondents were surveyed in the major cities, district centres and villages of Lithuania in 24 September - 13 October 2018. The age of surveyed people was from 18 to 61 years and over. The survey was carried out under the commission of the Chamber of Judicial Officers of Lithuania.