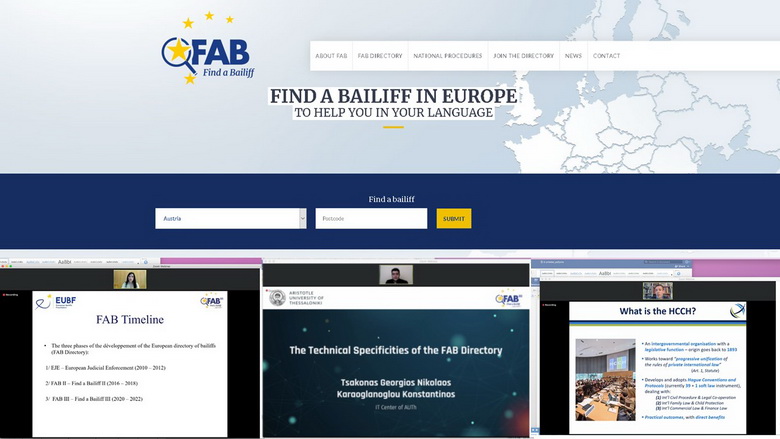 For the Member States of the European Union (EU) – it is a unified platform, which publishes relevant information regarding institutions, which are responsible for the enforcement of decisions. For all of the citizens of EU – it is a possibility to easily find a judicial officer in any Member State of the EU.

Such are the objectives of the EU funded „Find a Bailiff“ (FAB) project, whose realization was the talk of the remote online conference, which took place in the 10th of December. One of the participants of the said conference – Chamber of Judicial Officers of Lithuania – believes that such a tool will be available for the citizens of Lithuania in the near future.

According to Mark Shmitz, the president of International Union of Judicial Officers (UIHJ), the cooperation between EU Member States during the creation of e-justice and e-enforcement systems, is very important. The advantages of legal procedures, which are being handled electronically, only increase against procedures that require „physical“ contact. It is a modern way of ensuring the core rights of the debtor and the interests of the creditor.

As it was stated by Patrick Gielen, who represented the European Union of Judicial Officers (UEHJ), one of the main reasons for necessity of this project are the differences in legal systems between different Member States of the EU. Sometimes it is difficult for the creditor to understand, where he should start searching for legal help, regarding enforcement of decisions. Finding such information comes with a high cost of time and money, compared to just using a centralized system http://eubailiff.eu, which could point each interested party to the correct bailiff’s address.

During the conference it was highlighted, that not only did the COVID-19 pandemic not stop the further development of this project, but it also revealed the need of a centralized system. The FAB directory is planned to be integrated with other legal e-instruments, such as: e-codex, e-codex plus and e-justice. It is expected that the citizens of EU will be able to use the new EU judicial officer search engine somewhere during the years 2022-2023.