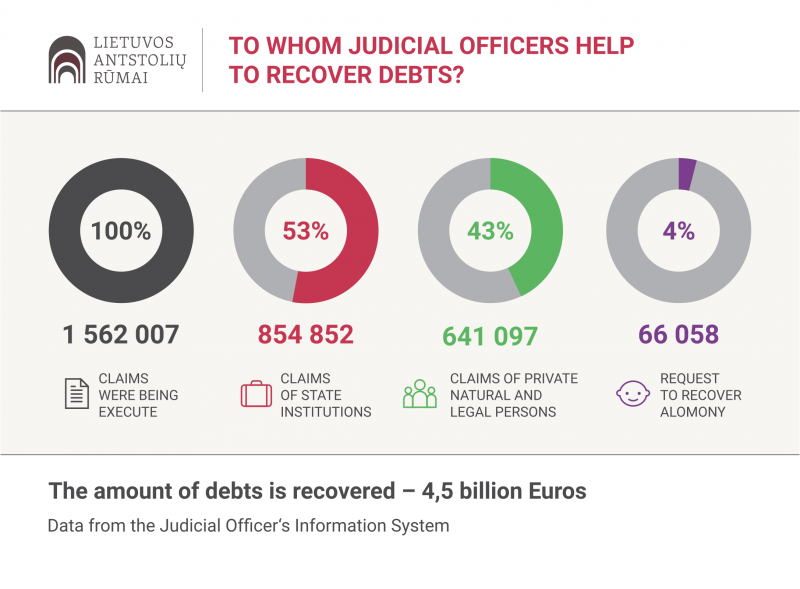 Despite quarantine constraints, 2020 was a favorable year for creditors. 139.9 thousand, or 63 percent the judicial officers fulfilled the claims submitted in full by repaying all the funds belonging to the creditors or ensuring the enforcement of non-monetary claims.

The figures confirm that Lithuanian judicial officers have become effective helpers in overcoming the COVID-19 crisis. It is obvious, now more than ever before, just how effective was the step to move debt enforcement to an electronic space,– says Inga Karalienė, Chairwoman of the Presidium of the Chamber of Judicial Officers of Lithuania.

In her words, the system of debt enforcement not only did not stop due to the pandemic, but also flexibly adapted to new needs. Right now, judicial officers balance the interests of both - creditors and debtors, by ensuring state enforced debt recovery benefits to debtors, remotely.

Actual chances of debt recovery have decreased by half during the first quarantine - in April and May of last year - but in the summer and autumn, all of the procedures have returned to normal.

It is true, that the total number of new claims filed to judicial officers last year has fallen the most, since the past five years. In 2020, creditors have submitted 198,6 thousand new applications for enforcement to judicial officers. That is 21,2 thousand, or almost 10 percent fewer applications, than there were submitted in 2019. However, as I. Karalienė notes, the tendencies of new debt decrease have been prevalent for the past decade and it is still too early to make a conclusion, how much the pandemic has affected last year's fall. 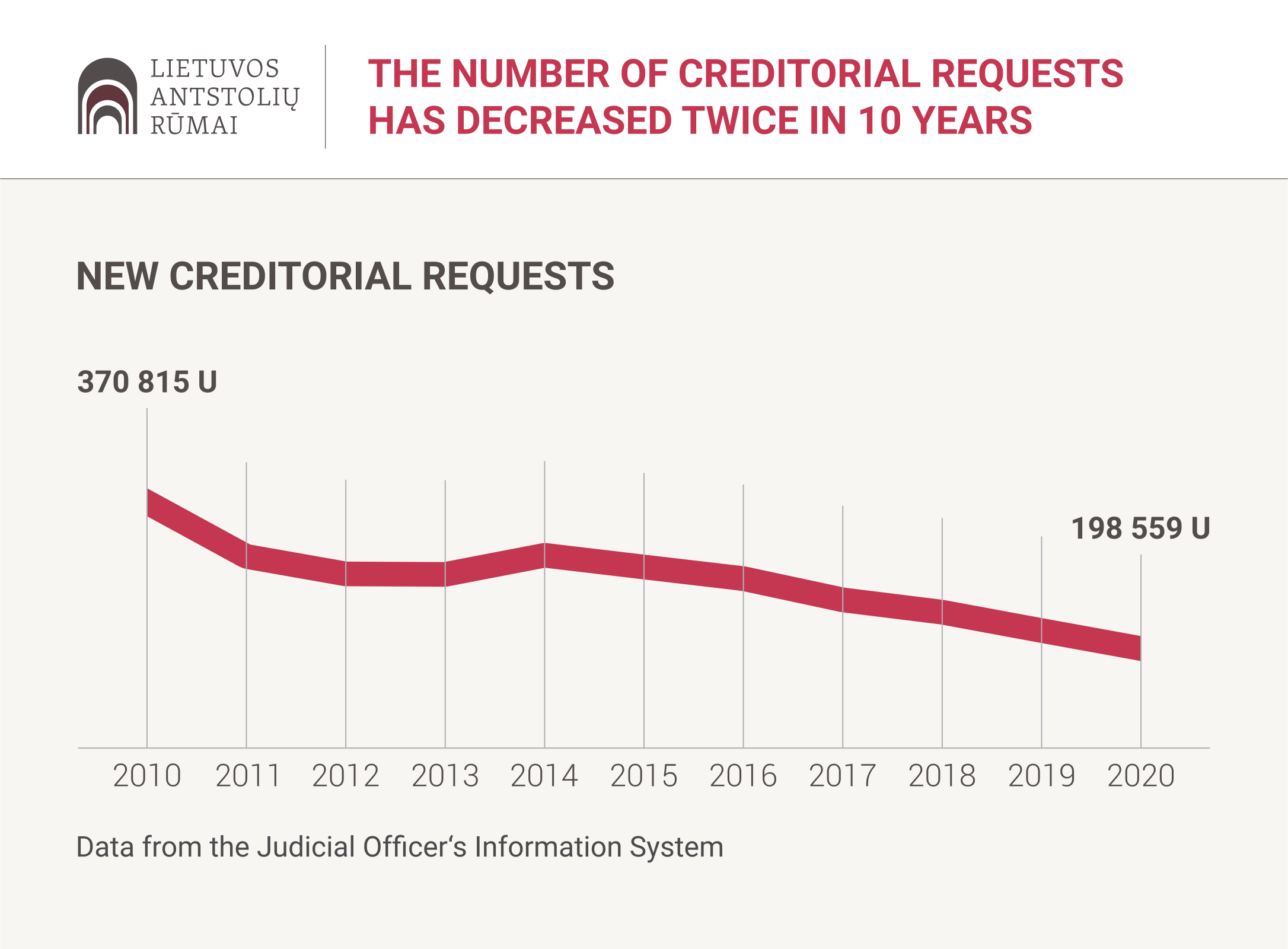 For five years in a row, the need to recover even the smallest debts, has also been declining. Last year, judicial officers received 48,6 thousand new applications to recover debts of up to 60 euros, which is 19 percent less than it was in 2019. In 2016 debts of this category accounted for 33 percent of all new claims, but in the last year – such debts accounted for only 24 percent.

The need for debt recovery in the field of alimony is also steadily declining. In 2020, 2,3 thousand of such applications were provided to judicial officers, which is 16 percent less than it was in 2019.

Although, the statistical average of debt recovered in euros is growing steadily. By completing one process, judicial officers have recovered an average of 625 euros in 2020. Statistically, this amount is 26 percent, or 164,7 euros higher than it was in 2019. This means that creditors approach judicial officers for the recovery of larger debt and that the enforcement proceedings are increasingly being used only for important reasons, when creditors are unable to recover solid amounts without enforceable means.

From the point of view of the Chamber of Judicial Officers of Lithuania, the unused reserves to increase the volume of actual debt enforcement, are simpler procedures for recovery of uncontested debts and are more flexible for applying compulsory measures.

Allowing creditors to apply to judicial officers directly for the debt enforcement of uncontested debts in extrajudicial way would ensure a cheaper and faster recovery process. After all, debts grow old during litigation. And according to statistics, the probability of recovering a new debt is 3-4 times higher than the probability of recovering the old one, and this trend is becoming more obvious with each passing year.

In cases, where debtors are unable to meet their obligations for objective and serious reasons, it would be rational for not only the court but also judicial officers to be able to deal with the deferral or arrangement of debts.

Larger amounts of state-owned debt could be recovered by introducing certain legislative changes, which would allow recovery from social benefits, granted to debtors, who refuse to work in the public interest.