Judicial officer statistics: the curve of repaid debts is rising, while the number of new debts is decreasing 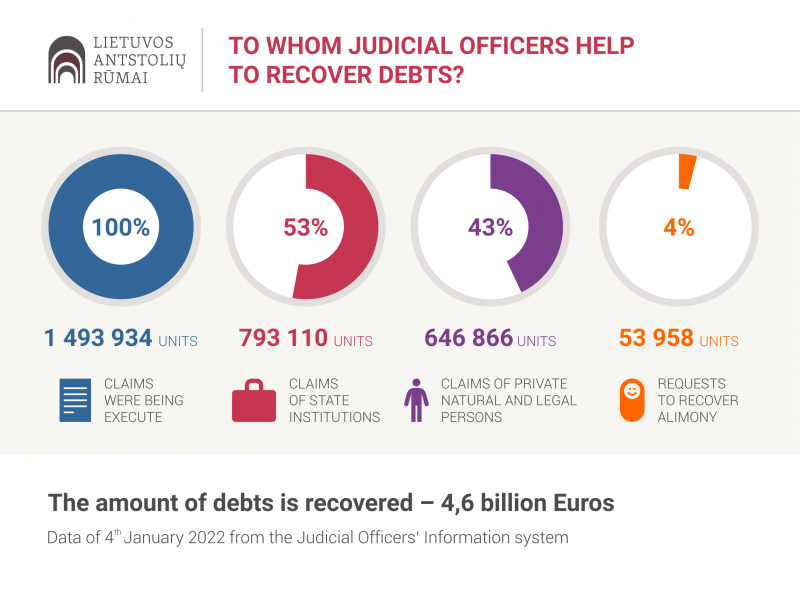 According to the data from the Judicial Officers' Information System, 147.6 thousand, or more than half of all recovery proceedings completed by judicial officers in 2021 have satisfied the claims of creditors in full.

At the same time, the number of new claims for the recovery of debts continued to decrease. In 2021, creditors submitted to judicial officers a total of 190.5 thousand applications for enforcement of judgments, which is 4% less than in 2020.

"The increase in the amount of recovered debts and the decrease in the number of new claims suggest that the COVID-19 pandemic did not cause a debt crisis in Lithuania, at least for now," says judicial officer Inga Karalienė, Chairwoman of Presidium of the Chamber of Judicial Officers of Lithuania.

Last year, the number of active cases that judicial officers had to close due to debtor bankruptcy has decreased by a record 68%. There were 1 733 such cases in 2021, and 5 485 in 2020. According to I. Karalienė, these changes confirm that government incentives and support have protected many businesses from bankruptcy due to losses caused by the COVID-19 pandemic. However, the head of the Chamber of Judicial Officers of Lithuania admits that last year many creditors had to wait longer for their money. This was due to the suspension of recovery of debtor income whose origin had changed. State benefits were paid to those who could not work due the pandemic, and debts cannot be recovered from such payouts.

Among the amounts recovered by judicial officers, 146.9 million euros were returned to private natural persons and legal entities (17.6% more than in 2020). This includes unpaid wages to employees, child support, damages awarded by the court, debts for utilities and communication services, debts to banks and payment institutions, etc. 19.3 million euros of recovered debts also supplemented the state budget last year (29.7% more than in 2020). This amount included unpaid taxes and fines for offences and violations of administrative or civil law.

Per completion of one process, judicial officers recovered an average of 703 euros in 2021 (625 euros in 2020). The growing amount of average debt recovered year after year clearly confirms that the enforced recovery process in Lithuania is increasingly being used to resolve serious financial problems, and the need for the services of judicial officers to recover small debts is continuously decreasing. In 2021 judicial officers received 6% less new claims for the recovery of relatively small debts of up to 60 euros compared to 2020 – a total of 45.9 thousand. The percentage of such debts among all new claims has dropped by 9% over the last 6 years: from 33 to 24%.

It is interesting to compare that, unlike in Lithuania, the flow of new debts submitted to judicial officers in Latvia and Estonia has increased in 2021.

The frequency of new overdue debts in Lithuania and Estonia is similar: statistically, one in 15 residents had one new debt last year. Whereas Latvians were indebted more often: one in 12 residents had one new debt last year. It should however be noted that, last year, Latvian creditors applied to judicial officers for much smaller debts than creditors in Lithuania. While in Latvia a statistical new debt in 2021 amounted to 2 490 euros, in Lithuania it amounted to 4 184 euros. This indicator also confirms that the enforcement system in Lithuania is consistently reorienting towards the recovery of larger debts, and small debts are more often repaid in good faith or recovered out of court.