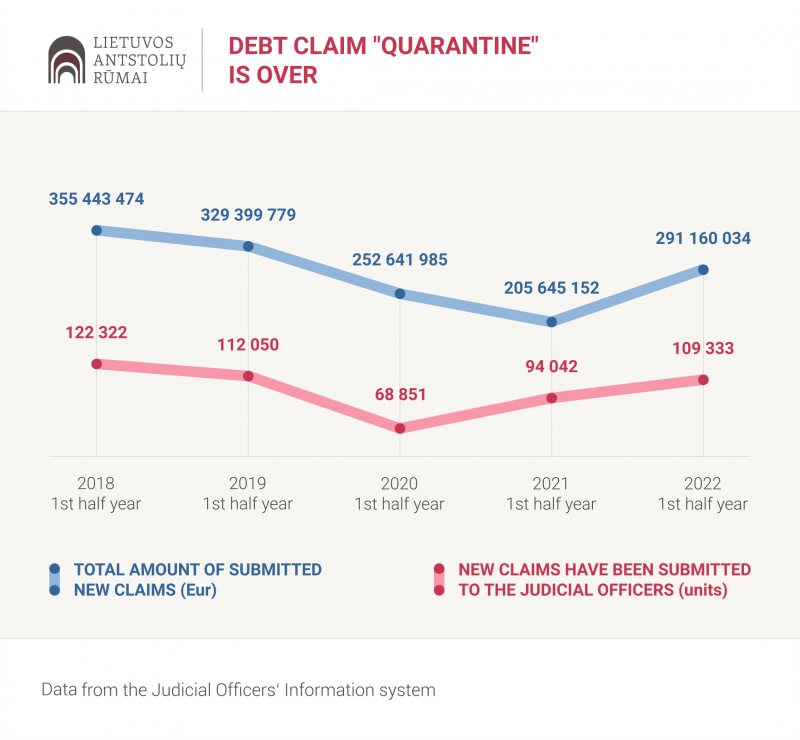 During the first half of 2022, judicial officers returned 99.5 million euros of debts to private individuals and state institutions. This is 34% more than in January-June 2021.

From the beginning of this year to July 1, 118,000 enforcement cases were completed in judicial officers' offices, of which 60% were fully completed. In these cases, the creditors recovered all the debts claimed.

For the first time in several years, the curve of new debt is starting to climb.

According to the data of the Judicial officers‘ information system, 109.3 thousand new demands for debt enforcement were submitted to the judicial officers in six months of this year. This is 16% more than during the same period in 2021. State institutions submitted new requirements to the judicial officers only 4% more, while private individuals – 33% more. Private legal entities who submitted 35% more new claims dominated. However, private individuals also actively applied: the total number of their claims increased by 17%, and among these claims there were also claims to recover maintenance (alimony).

According to the judicial officers, the particularly sharp increase in the demands of private legal entities was determined by the increased number of applications from fast credit companies and private debt collection companies. Many of the aforementioned companies submitted 1.5-3 times more new requirements in the first half of 2022 than in the same period last year. Typically, several hundred to several thousand euros are required for outstanding quick loans or repurchased debts awarded by the courts in 2022. During the Covid-19 pandemic, the number of such requirements has decreased.

One of the reasons for the increase in new requirements to collect maintenance (alimony) is the increased inflation, due to which maintenance payments are indexed by increasing them from February 2022 not by a few percent (as was the case before), but by 10.6%. Not all persons paying maintenance follow the established procedure and index payments. When an amicable agreement cannot be reached, creditors (most of whom are single mothers) have to turn to judicial officers. Although the flow of new enforcement documents is currently approaching levels of 2019, the amounts demanded by creditors still remain significantly lower than before the COVID-19 pandemic.