Can statutory amendments save Lithuania from debts? 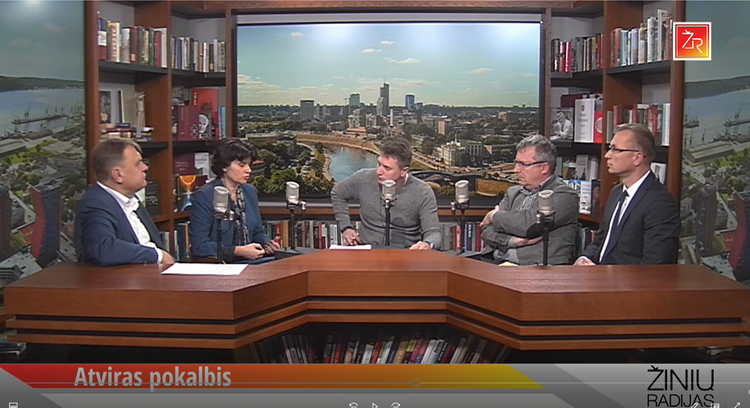 From left to right: President of the Lithuanian Business Conference V. Sutkus, Chairwomen of the Presidium of the Chamber of Judicial Officers of Lithuania, Judicial Officer I. Karalienė, journalist R. Musnickas, Professor of the Faculty of Law of Vilnius University, Habilitated Doctor of Law V. Nekrošius and Deputy Minister of Justice E. Šuliokas

The portfolio of Lithuanian debtors preserves more than EUR 4 billion of debt, or more than a tenth of the state’s gross domestic product. It includes unpaid salaries to employees, utility charges, outstanding loans, unpaid fines for breaches of administrative law and numerous other debts. What is going to change since 1 December 2018 after the entry into force of the mitigated debt recovery procedure? Will the balance of interests of lenders and debtors be maintained?

These questions were discussed in the radio broadcasting “Open Conversation” of the radio station “Žinių radijas” on 25 September attended by Chair of the Presidium of the Chamber of Judicial Officers of Lithuania, Judicial Officer Inga Karalienė, Deputy Minister of Justice Eugenijus Šuliokas, Professor of the Faculty of Law of Vilnius University, Habilitated Doctor of Law Vytautas Nekrošius and President of the Lithuanian Business Conference Valdas Sutkus.

Commenting on the amendments of Article 736 of the Code of Civil Procedure to enter into force from 1 December, by which it is intended to reduce deductibles from debtors’ income and to review judicial officers’ rates, Head of the Chamber of Judicial Officers of Lithuania I. Karalienė expressed the lack of integrated approach.

No one proposes any clear criteria and methodology for determining these rates. I wonder why? – asked I. Karalienė.

According to her, the actions of the Chamber of Judicial Officers of Lithuania confirm that judicial officers are very actively seeking the most transparent leverage of regulation of rates. Already in 2005, an international audit was invited at the initiative of judicial officers. It was assessed how the price rates could ensure the efficiency of enforcement of judgements and encourage judicial officers to accept all enforcement documents regardless of their decisions. However, neither the methodology for determining judicial officers’ rates, nor the procedure has been developed and accepted so far.

As I. Karalienė emphasized, about 20% of judgements are to be enforced by judicial officers at a loss. It includes enforcement documents of a socially sensitive group: evictions, recovery of maintenance for children, compliance with the obligation to observe the procedure for communicating with a child, and the obligation to demolish illegally constructed buildings. Another problem is that about 60% of all requirements for enforcement are not met because debtors are insolvent or simulate insolvency.

According to Prof. Habil. Dr. V. Nekrošius, the wave of mass restructuring of regulation of judicial officers’ activity is the highest-level populism. It threatens the economic development as it leads to 2002 when creditor requirements were almost unsecured with state judicial officers.

President of the Lithuanian Business Conference V. Sutkus with anxiety described the recently spreading tendency to focus on concessions to debtors and to review judicial officers’ actions neglecting the underlying causes of debt growth.

“We hear that the debtor is poor, that he faces difficulties and needs help. However, in reality we observe that intentional indebtedness is widely spreading”, – concluded V. Sutkus.

According to Deputy Minister of Justice E. Šuliokas, time is needed for all proposals to be considered. In order to systematically review the regulation of judicial officers’ operating rates, the Ministry of Justice has formed a working group involving the representatives of the institutions concerned.